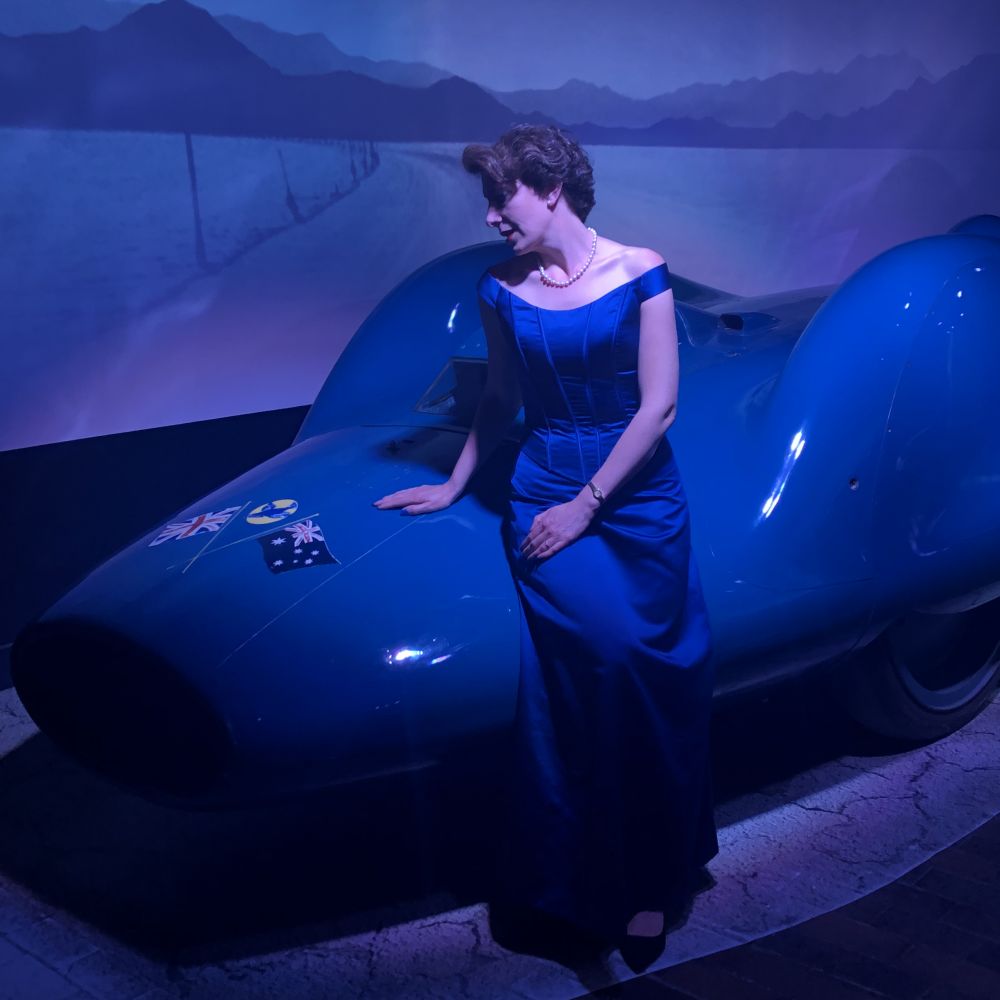 Track 1) Bluebird - beautiful opening song. Clever and magnificent composition. At some point the tempo is speeding up - and in my imagination I see and feel Donald Campbell in his Bluebird K7, who's racing, almost flying, over the waves of Coniston Water, accelerating, accelerating..........until the song returns to its original tempo, which puts an end to these images of supersonic speed........the silent mood returns and I'm beginning to realize that I just witnessed Sophia's musical depiction of Donald's very last speed record attempt.........a hero he stands.

Track 2) Kaiser - Good song. When I listen to this track on the CD that Sophia sent me - to the Netherlands - I realize that I am glad I bought the CD. I have also Spotify Premium and I once listened to this album there, via my headphones from my Samsung Galaxy S10+ smartphone, which sounds good. But wow, I hear the difference! If you have a good quality stereo set or 5.1 set or whatever, with good speakers, you get a special listening experience. All frequencies can be heard perfectly, including ultra low sounds. That bassdrum and standing tom in "Kaiser", it's as if the drummer was sitting behind his kit right in front of you.

Track 3) Just Carry On - I love the quiet and intimate atmosphere of this song. "Just carry on, carry on, as if there's nothing wrong, carry on". Reminds me of life. Don't we all feel this at some moment in our life?

Track 4) 4am - My nr. 1 favourite track of this excellent album. It begins with a bell striking four. Beautiful. The song builds up wonderfully, in that magical atmosphere I also heard in some other songs by Sophia. The most magical part, to me, starts after the first time she's singing "Hey Skipper". It is the verse, not the chorus, which is also beautiful. But listen to the bass guitar in combination with the drums......wow! I love that pumping tandem. That monotone but supreme one-tone-bass pumped forward by the bassdrum and snare.......gorgeous.......with the changing piano chords above them.....👌 and then this beautiful saxophone.......can't get enough of this track 4 - listen to it at 4 am!

Track 5) Twinkle In His Eye - Nice, that disco-bass takes us back to the times of Donna Summer. I mean: not the song as a whole is in the style of miss Summer - but if I focus only on that bass guitar, yeah, then I get a flashback of Donna. Magnificent piece of music, this song. It gives me twinkles in my eyes......and ears.

Track 6) Reflections (To Gina with love) - When I hear this song I feel serenity: "Cos I wanna breathe the air with you, and smell the scent as we take in the view". Isn't that said beautifully?

Track 7) My Philosophy - Excellent jazzy song. Sung and played laid back, in a wonderful timing, good song to unstress and relax!

Track 8) Stay - Certainly another favourite track of mine! Played and sung demurely, this song creates a quiet, peaceful and somewhat romantic atmosphere. The lady with her sweet and lovely voice asks: "stay.....with me.....oh won't you stay.....with me?".........who wouldn't want to?

"Bluebird" is an excellent, versatile album by a very talented and versatile singer/songwriter/composer/musician.

Bluebird is a ship that sails across the oceans; it stops in 8 different harbours of 8 completely different cities which are all beautiful and one of a kind. It's a ship to be proud and fond of!

I can also put it this way:

"Bluebird" is an album that has only good songs. And some are even better than others, which, of course, is always a matter of taste.

The end of my review takes me to the production and mastering of this excellent album. What can I say? Outstanding production and mixing by Benjamin Dady! Also I have to mention the perfect choice of instrumentation and beautiful arrangement by Sophia and Benjamin Dady. And mastering.......well, "Twinkle In His Eye" was mastered by Neil Segrott, "Bluebird" and "Reflections" were mastered at Abbey Road Studios and the other 5 songs have been mastered by Benjamin Dady. This "finishing touch" sounds fantastic. Without exaggeration, this album is the best one I heard in 2021!

Bluebird was released on the 17th July 2021 to mark 57th anniversary of Donald Campbells successful attempt at claiming the World Land Speed Record on Lake Eyre in Australia. He went on to break the water speed record on new year’s eve the same year. To date the only person to have broke both records in the same year.

Some 2 plus years in the making it's plain to see that Bluebird is a labour of love by its creator Sophia Dady. Talking to her it's easy to see that Coniston and its Campbell connection has captivated her as it has done to thousands over the years.

Sophia has included 8 songs on the album mirroring the 8 records Donald Campbell held. Each song has its own story to tell about aspects of Donald's life and career, each crafted with such care and precision from Kaiser which started Donald's quest through to 4am describing the early morning starts and tribulations in Australia when chasing the land speed record to the sublime title track Bluebird listening to the lyrics and the increasing tempo of the music one can see in one's imagination Bluebird entering the measured kilometer on that fateful day in January 1967.

Just Carry On and Twinkle In His Eye capture 2 important aspects of Donald's character his unwavering determination despite what life throws at him and sense of fun despite the seriousness of the task in hand.

Reflections (To Gina with love) gives an insight into the love between Gina and Donald and her steely determination to succeed that she has inherited from her father.

My Philosophy takes me to a cabaret club with Tonia (Donald's wife) performing on stage with Donald in the audience contemplating another record attempt and that fire he had inside to do what sometimes appears impossible.

Stay perhaps sums up the whole wonderful project Donald has I'm sure entered into his fans phsyque in one way or another. It is a fitting way to close the album.

Brilliantly written and performed this really is a special piece of music paying tribute to one of this country's greatest and underappreciated heroes. The tracks are not over produced which allows the raw emotion and storytelling to come through, this in turn is an ideal start point for anyone who is not familiar with Donald's achievements to hear his story in a unique way so different to a history lesson.

Sophia Dady is an artist that I love to showcase and support on my radio shows on Ridge Radio and it is easy to see why. When Sophia releases a track you know she has put her heart and soul into her work and the results are stunning. Sophia is blessed with a great voice with beautiful soft tones and that is the icing on the cake as far as I am concerned and that compliments her song writing skills.

On the 17th July this year, Sophia launched her new album BLUEBIRD and what a treat the album is for music lovers and fans of the legendary speed king Donald Campbell. Sophia self-confesses that she is obsessed with the man that broke so many land speed records and that it is easy to see why as Donald Campbell is a legend and marked in History as a true great.

When someone has an interest in a subject or in this case a human legend you try to create something that will honour them and their family and in this case Sophia has done just that brilliantly in the shape of a music album named after the jet hydroplane Donald Campbell used to set seven incredible speed records.

The album tells the story of the speed king in a moving way and consists of 8 superb musical stories in what is a superb concept album. Bluebird is the opening track and sets the scene and story of the album in a very informative way and that is what makes the album stand out to me. The songs 4am, Twinkle In His Eye, Reflections (To Gina With Love) and Stay are awesome tracks.

A preview of Sophia Dady's Bluebird landed on the doormat a few days ago.

A brilliant collection of songs looking at individual moments in the life of Donald Campbell as he broke land and water speed records. This year marks what would have been Donald's 100th Birthday. Interestingly, the tracks bridge multiple genres. Sophia has listed many influences in her music and they can be heard on this album. The tracks can be played individually but work equally well playing as a complete suite, almost as a concept album.

Bluebird:
Title track, could easily be the final track as well as the opener. We are introduced to Bluebird and her speed record attempt on Coniston Water. A cinematic track with discrete strings backing the vocals, piano and drums. The track starts gently, with the mantra "This is for my country" evident throughout, two thirds in the tempo rises. Sophia takes us through the thoughts that must have been going through Donald's head prior to the attempt, including reference to press speculation into his private life. We hear a countdown and a new record attempt starts. Ominously, we soon hear "This was for his country", "He lost his life attempting a new record”- a fitting epitaph to a patriotic hero.

Kaiser:
An upbeat, calypso, Jazz style beat with distinct piano. Indignantly, Donald responds to hearing that the industrialist, Henry Kaiser, is backing an American water speed record attempt. The lyrics are fast and are a detailed story, telling of Donald wanting to defend his seriously ill father's record, again patriotically keeping the record in the UK. He recruits Malcolm's loyal mechanic, Leo Villa, and overcomes his doubts. There's even the technical specs for the petrol heads. "Kaiser to hell with you" - The Americans were no match for Team Bluebird

Just Carry On:
A gentle piano opening and soft lyrics, builds into a mellow dreamy musing about Donald's mindset, "Just carry on as if there is nothing wrong" - A beautiful song to the memory of Donald has the feeling of a love song to the man himself.

4am:
A bell strikes four, a dark piano begins as we learn it is four AM and another hard day starts. A wonderful sax makes multiple appearances as the track takes a soft rock look at the determination of the Skipper.

Twinkle In His Eye:
A retro disco vibe. Upbeat, fast paced, with a synth and slap bass line that could grace any 80's club classic.

Reflections:
Sophia's trademark piano takes us to Donald explaining to his daughter, Gina, about his father's memory being the driving force behind his quest for speed. May have also been him giving Gina the inspiration to take up the quest for speed - "Just live your life for me”.

My Philosophy:
A lively Jazz number evokes images of Donald winding down and relaxing after a long busy day in the workshop or testing. Work hard and party hard - "Live Life, Be Free, that's My Philosophy" Sophia goes back to her Jazz roots and inspiration, you can almost see the smoke and feel the heat of a Jazz Cafe.

Stay:
Haunting almost childlike request for "You to stay with me" - I'm minded to think of Gina asking her late father's spirit and memory to "Stay" support, guide her through her life. Donald certainly looked to his father's legacy as a guiding light.